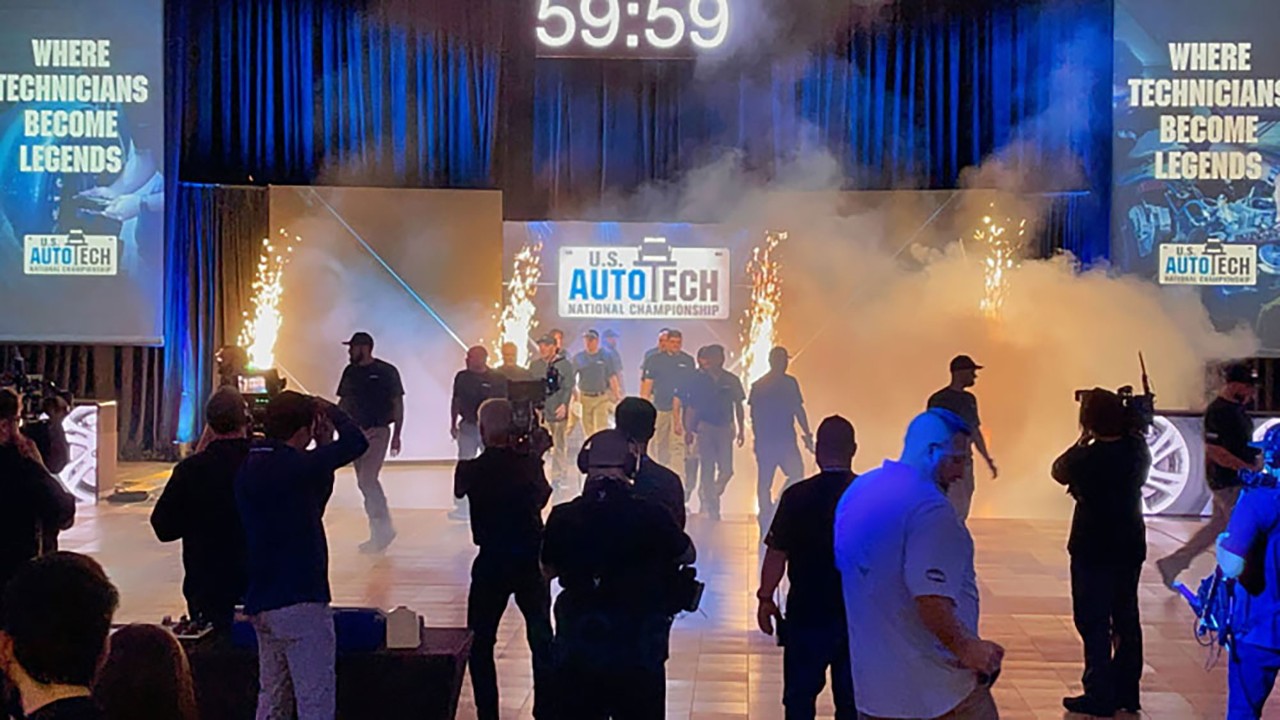 What it was like at the first-ever U.S. Auto Tech National Championship

The inaugural U.S. Auto Tech National Championship (USATNC) as part of the IDEAL Trades Championship Series, recently wrapped up in Nashville after months of national qualifying rounds, the winner from each category was finally crowned with the title of being the top Auto Technician in the USA. I was on hand to watch the championship rounds which were held over two days at the Music City Center, in downtown Nashville.

Honestly, I didn’t know what to expect, having only seen one of the qualifying rounds earlier in the year at the SEMA Show, but walking into the venue for the first time was impressive and I am guessing a little intimidating for the contestants. Instead of a garage the final would be held in an arena, complete with grandstands, a fan zone, large screens, and sponsorship banners, it was like going to a major sporting event, but instead of basketball or tennis, technicians would be facing off. 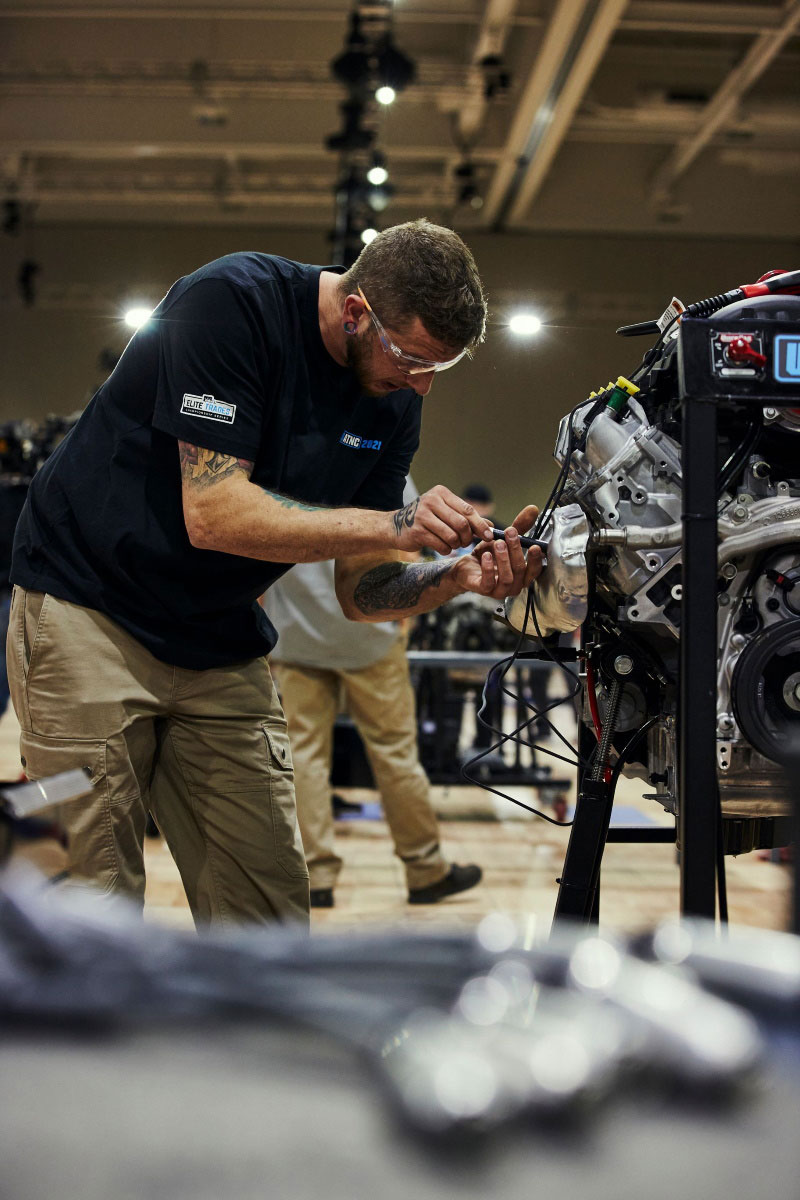 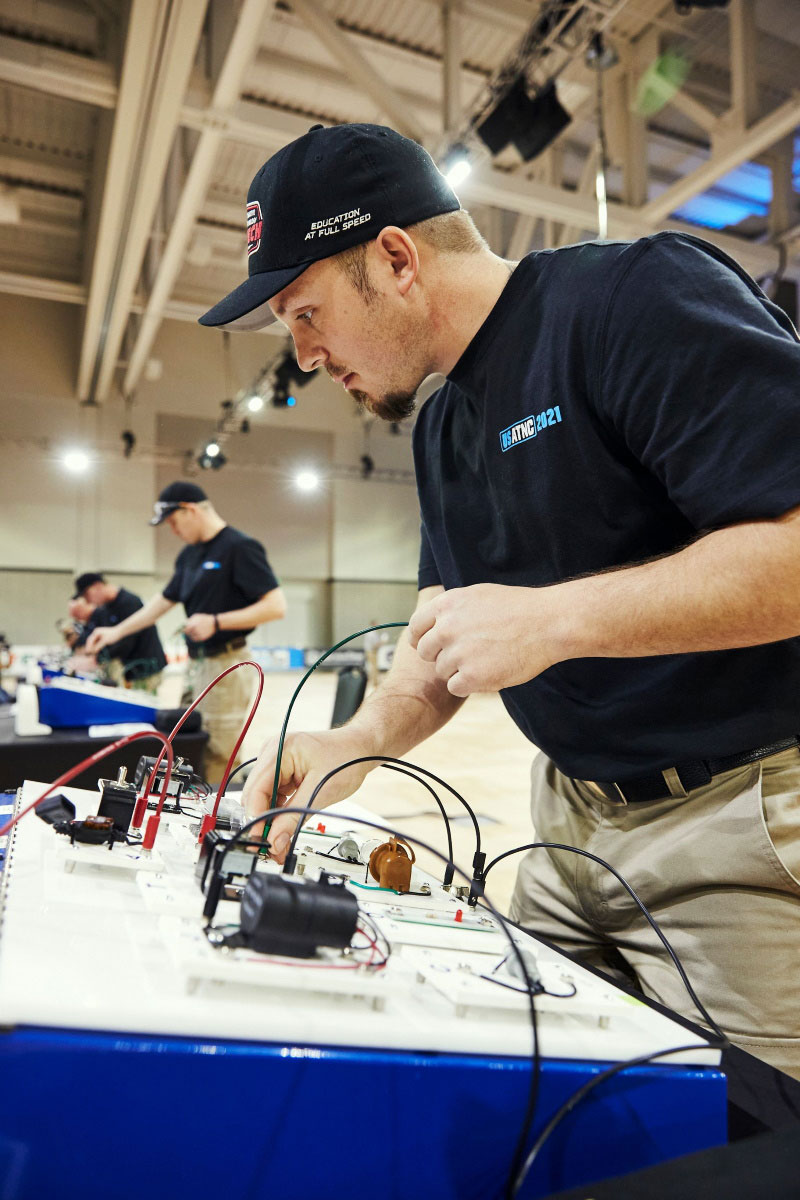 The final was held over two days with two rounds of eliminations on the first day, and a final round to decide the champion on the second. The competition was divided into two categories Professional Technicians and Student Technicians, but both would be completing in similar challenges. Scoring and specific diagnostic and repair tasks were different between the two categories. Although the challenges were different, this setup gave the student competitors a bit of an opportunity to watch and learn from the professional rounds before their own, after the closed pre-round briefing.

Since the USATNC is about finding the ultimate auto tech the competitors could face a challenge based on any repair that could be performed on a vehicle today. So, from a brake job to diagnosing a transmission problem the tech would need to have general knowledge about all systems of a vehicle if they hoped to win. After watching the first-round briefing, I headed upstairs to the arena where dozens of crew members from the production team were prepping for the introductions and first round of filming.

The USATNC will be broadcast on Sunday, February 6th at 10:00 AM with an encore at 8:00 PM Eastern on Fox Sports 2, hosted by Chip Wade. The contestants entered the arena with the fanfare and fireworks of a NASCAR Cup Driver, all wearing identical 40 Grit workwear supplied by sponsor Duluth Trading Company. The first round would feature 32 mechanics and their challenge, completing an electrical system based on a wiring diagram, diagnosing the faulty component, and repairing the fault. They would have one hour to finish the task. As the clock counted down slowly technicians began punishing the time clock and the judges began inspecting their work. Some techs finished in around 30 minutes while others went to the very end of the 1-hour time limit. 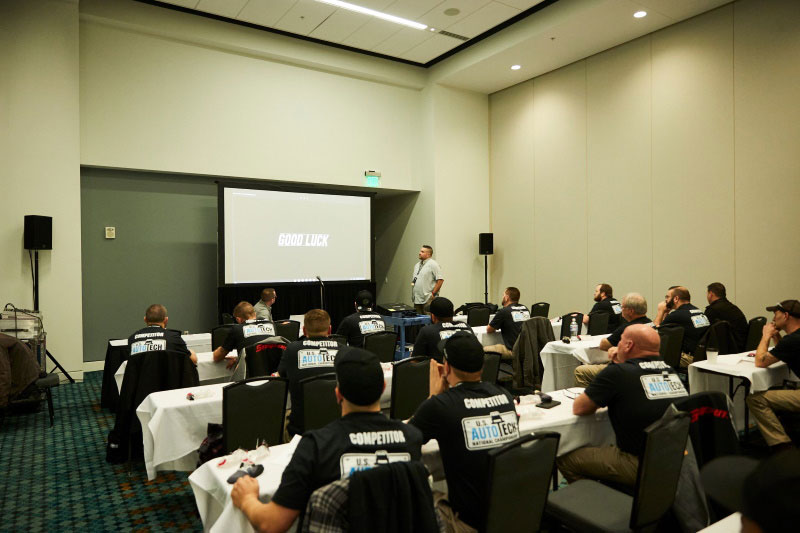 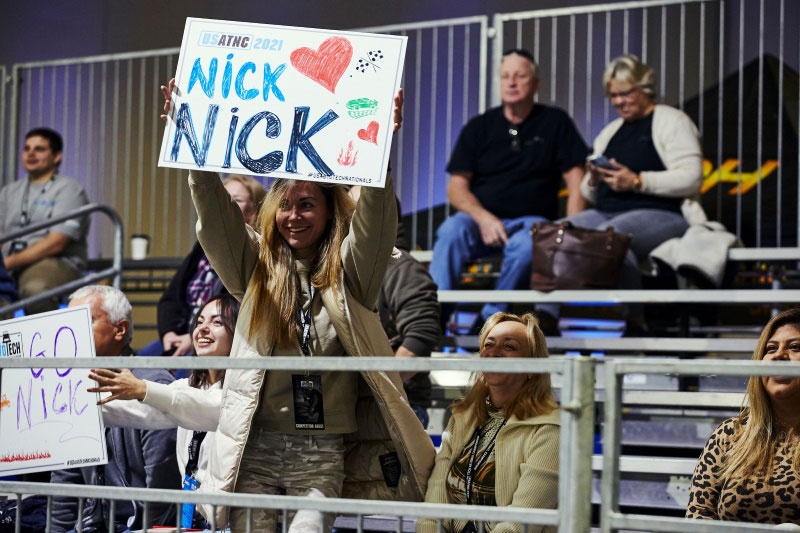 The students would be next up with their first-round electrical challenge, then it was time to break for lunch. I sat with some of the competitors all of whom had varying levels of confidence in how they had performed, since for many electrical systems wasn’t their strong point, it had caught them off guard. But this first round would be cutting 50% of the field from each category from 32 down to 16, so it needed to be something. Heading back upstairs for the announcement of who had made it to Round 2, the 16 tables had already been positioned in the arena with covers so competitors couldn’t see what challenges they faced next. As the 16 from each category were called up it was hard to watch the disappointed faces of those who hadn’t made it, but they all handled it well, were proud to have qualified, and most would stay on to cheer on their fellow competitors from the grandstands.

Round two was another hour-long challenge, but this time the tech would need to diagnose and repair a driveshaft issue. In the end, the repair required properly changing universal joints between the slip-yoke and the driveshaft, however, many competitors found this easier said than done. Missing c-clips, cracked castings, and messy workstations all cost technician points. Plus, as we learned in round one, just because a tech finishes the challenge first, doesn’t mean they are going to be the winner. Competitors are judged by several factors, completing the repair correctly, documenting the required specifications, finishing with a clean and organized workspace, and of course overall time. The pressure was on as with fewer competitors in this round the camera crews were able to focus more on each tech as they attempted to complete the challenge. Swapping out universal joints is hard enough as it is, but it has to be even harder with a crew of camera operators watching your every move.

Once the students completed their second round there was a break for dinner, the competitors and their family/friends were all nervously anticipating the results as the 16 competitors from each category would be reduced to just five finalists. Once again, the announcement was made in the arena, fog machines and fireworks greeted our final five who would take on the final challenge the next day. In chatting with some of the auto techs who didn’t make the final five, they all were honestly just so grateful for the opportunity, the recognition, and each of them was planning to take part in next year’s qualifying competition. The night wrapped and we would have to wait until the next day to find out who would be taking home the title and prize money.

The next morning the five professional technicians that had made the cut were heading into the briefing room, I tagged along to see what kind of challenge they would be taking on. All they were told is that they would be working on a V8 engine, and they would have just two hours to diagnose an issue that would require compression testing the cylinders and properly executing the repair. In the arena, five workstations were set up with a GM Small Block V8 on a test stand. The crowd of spectators was larger than the day before and many of those in attendance had taken advantage of the free sign-making materials to cheer on their favorite competitor. 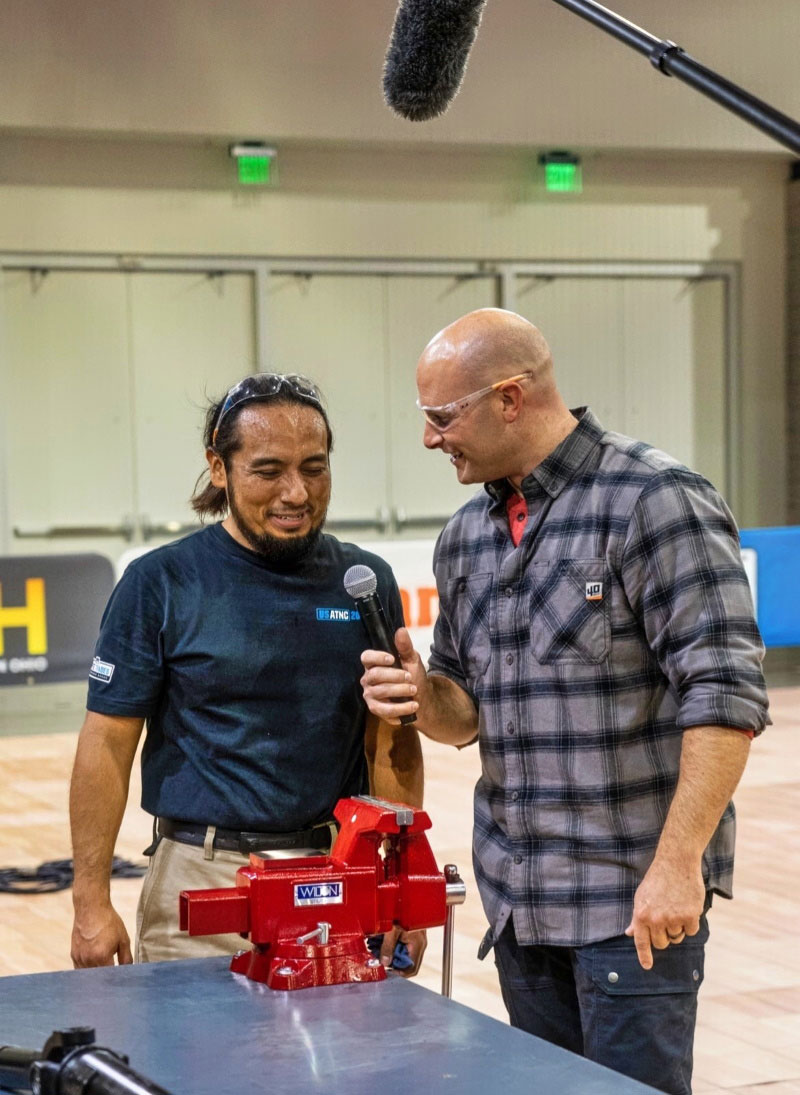 The final round of introductions was made, the countdown clock was set and the competition was on. There was a flurry of activity, camera operators, photographers, judges, and the crew all buzzed around the competitors as they attempted to figure out what they needed to repair on the small block engine. In just a few moments the sound of engines cranking over and compression test gauges venting echo through the arena as the crowd shouted words of encouragement to the finalists. In a display of sportsmanship and comradery, a group of the eliminated competitors made their way around the edge of the arena to show their support from the sidelines for each of the competitors.

The issue, a bad head gasket, which means removing the entire top half of the engine, replacing the gasket, and putting everything back together correctly, now most shop manuals say that the average head gasket job should take 3-5 hours, so diagnosing the problem and getting it done in just two hours is a monumental task. As time ticks down the first competitor completed the challenge, followed closely by the second and third tech to finish, just two finalists remain, but because of the way judging works, neither is out of the race for the grand prize.

With just a few minutes left, the fourth competitor completes the task, and as the buzzer sounds off at the two-hour market one loan tech is still working on his engine. Tools down, the judges move in to check the work and tally the final score that will determine the winner of the $40,000 grand prize. The crew also must set up the arena for the student competition which is just a few hours out. The student finalists, knowing what to expect in the challenge are already formulating their plans, the top five student competitors also have an additional layer of rivalry, since they all happen to be from the University of Northwestern Ohio (UNOH) automotive technology program. UNOH happens to be one of the top schools for motorsports in the country and was an early sponsor of the USATNC. While students from other schools had made it to Nashville, UNOH students set the pace and led the competition early, so it was no surprise that they dominated the finals.

The final student started fast since they already knew what they needed to fix, however, part of what they would be judged on included documenting cylinder compression, so they couldn’t skip steps. Just as with the pros, one contestant finished well before the others and others ran until the clock ran out. But as we learned in previous rounds, the winner is likely never the one who finished first.

The final break before the announcement of the winners had everyone nervous with anticipation, a lot was riding on the line as the winner of each category would be taking home $40,000, with second place earning $20,000, and third place $10,000, that means two of the final five would be leaving home empty-handed and since the judges had to verify the quality of the repair it was anyone’s game.

The arena was reset for the awards ceremony, the students would be first to find out their fate, with Randy Giroux taking home the first-place prize in the student category. In the pros, Logan Brown would be declared the National Champion and bring the title home to Lebanon, Pennsylvania. In both categories as the crew and judges said, the tech that finished in the quickest time was not the overall winner.

For a first-year competition, I was impressed by how well run it all was, but what was more impactful was the commitment from the sponsors and organizers to put on an event that celebrates the men and women of the trades. Having grown up on a ranch with family and friends that worked in the trades it was exciting to see these hardworking people celebrated like rockstars. Many times, these jobs are not only dirty and hard… but thankless. The USATNC is a catalyst to change that perception highlighting that a job as an auto technician can take you as far as you are willing to dream and that it can be as exciting as turning wrenches on the latest racing machines, or as important as making sure that a working mom has a safe vehicle when she leaves your shop. I am excited to see how this competition grows next year and the impact it will make on the automotive industry. 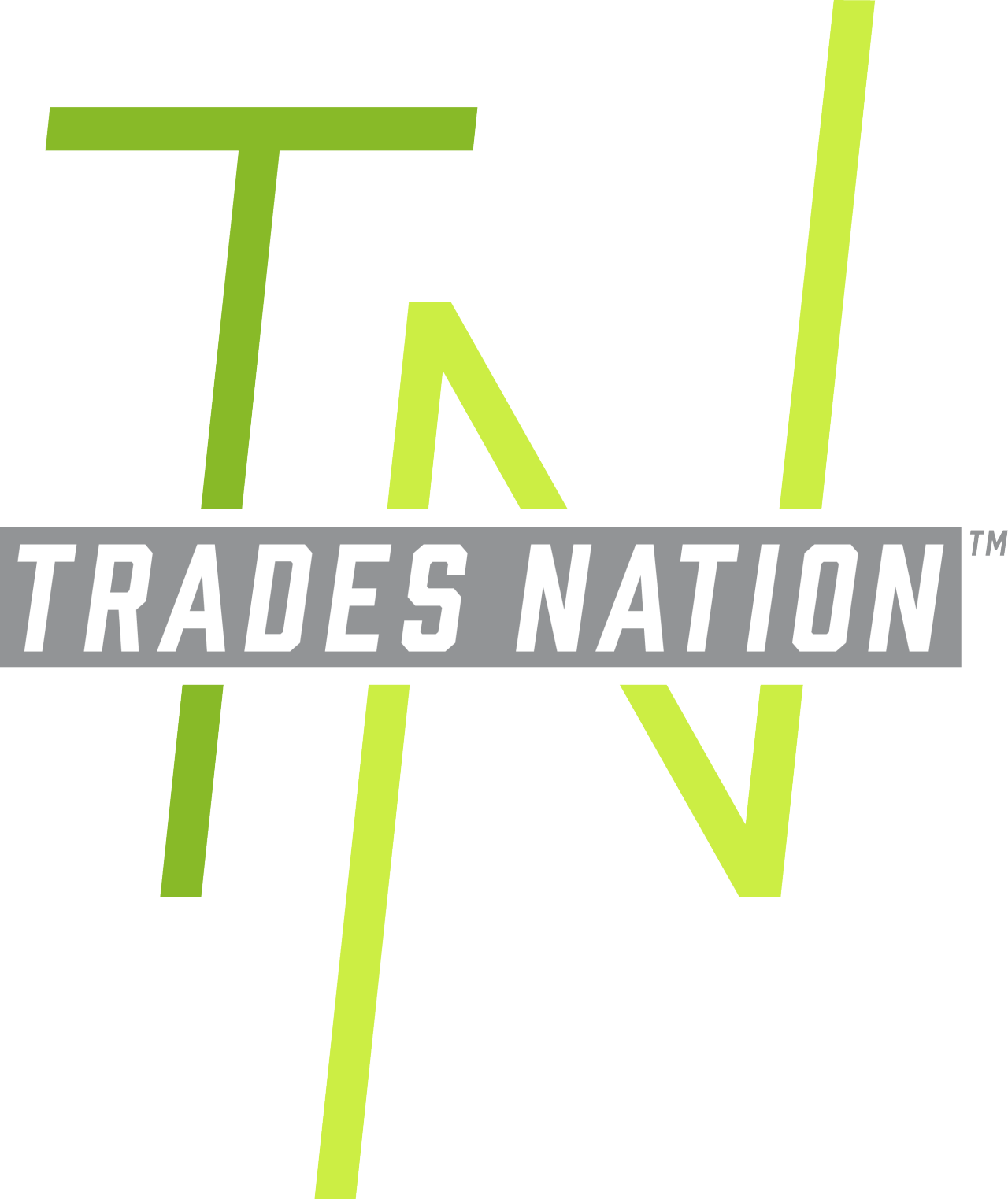 By providing your email address, you agree to receive information and offers from Trades Nation.